Our lab studies emergent phenomena in quantum materials, topological phases of matter as well as spintronic devices and materials primarily through imaging. Other techniques we use include conventional transport measurements simultaneous with imaging, nano fabrication and high-frequency measurements.  Below is a description of the imaging technique that we are currently using, scanning SQUID microscopy, as well as research topics the PI has worked on in the past at Stanford University and Delft University of Technology. Stay tuned for updates on current projects. 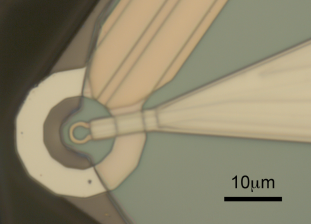 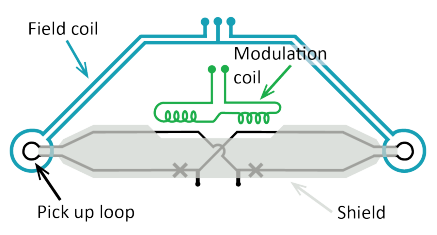 A Superconducting QUantum Interference Device (SQUID) is a very sensitive magnetic flux detector. The SQUIDs developed in the Moler lab are designed to be compatible with scanning and to provide a spatial resolution on the micron scale. On the right an optical image of the pick-up loop and field coil of a SQUID as described in this paper by Huber et al is shown. The pick-up loop and field coil are on the corner of the chip, which will be scanned close to a sample. As shown in the schematic the pickup loop is part of a SQUID loop. The SQUID and field coil have a gradiometric design, such that running a current through the field coil applies a local magnetic field to the sample without inducing net flux in the SQUID. Different measurement modes are: 1) probing local magnetism, 2) probing local magnetic response using the field coil (e.g. the diamagnetic response of a superconductor), 3) imaging transport by sensing the magnetic field produced by a current, 4) probing ring currents induced by flux threading the ring (e.g. to measure the I-Φ characteristic of a junction in a superconducting ring or persistent currents in a normal ring). 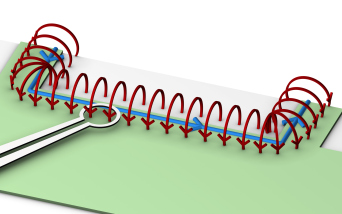 The current in a two-dimensional topological insulator (2D TI) is expected to be carried by edge channels, which so far is only evidenced by transport measurements. At Stanford we have imaged the current density in HgTe quantum well as well as in InAs/GaSb quantum wells, the first and second experimentally realized TIs, and directly observed that current flows in the edges. The measurement principle is shown in the cartoon. A current (blue) flows at the edge of a device (green), producing a magnetic field (red) that is measured by detecting the flux through the SQUID’s  pickup loop (white). For a two-dimensional current density we can reconstruct the current distribution from the flux image. An example is shown on the right. The normalized x-component of the current density when the Fermi level in the device is tuned into the bulk energy gap. shows that the current flow along the edge of the device.

(a) The QDs are defined in a (Al,Ga)As/GaAs two-dimensional electron gas (2DEG) by locally depleting the 2DEG using surface gates. (b) AFM image of a double dot device with the circles indicating the rough position of the dots. Next to the dots a quantum point contact (QPC) is formed, a narrow channel whose resistance depends on the charge on the dots. By monitoring the current IQPC we can infer the charge state of the double QD. (c) Measured charge stability diagram of a double QD. Displayed is the differential current through the QPC as a function of the voltage applied to LG and RG. A change in IQPC (and hence a peak in the differentiated current) occurs when an electron is added to the double dot. Labels (NL,NR) indicate the numbers of electrons on the left and right dot. The (0,0) region is identified by the absence of lines in the lower left region. Tuning into this region and then loading the QD with a known number of electrons is the starting point of our spin-dependent experiments. 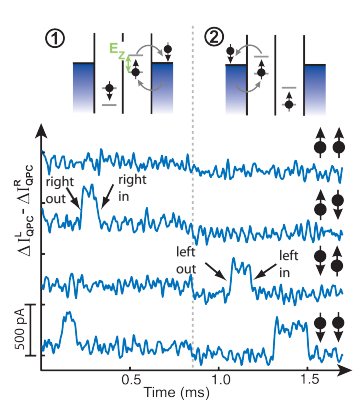 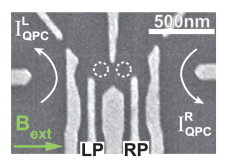 Measurement of coupled quantum systems plays a central role in quantum information processing. At TU Delft we have realized independent single-shot read-out of two electron spins in a double quantum  dot. The read-out method was all-electrical, cross-talk between the two measurements is negligible. Using this read-out we could directly probe the anticorrelations between two spins prepared in a singlet state and to demonstrate the operation of the two-qubit exchange gate on a complete set of basis states.

On the right electrochemical potential diagrams showing the double-dot configuration in the two read-out stages. Tunnel events that occur for a ↓↓ state are indicated. Below the diagram single-shot read-out traces are shown, displaying the difference of the current through the two QPCs, which are oppositely biased (22). The first and second parts correspond to read-out of the right and left dots, respectively. Four typical responses are shown, one for each of the possible two-spin states. 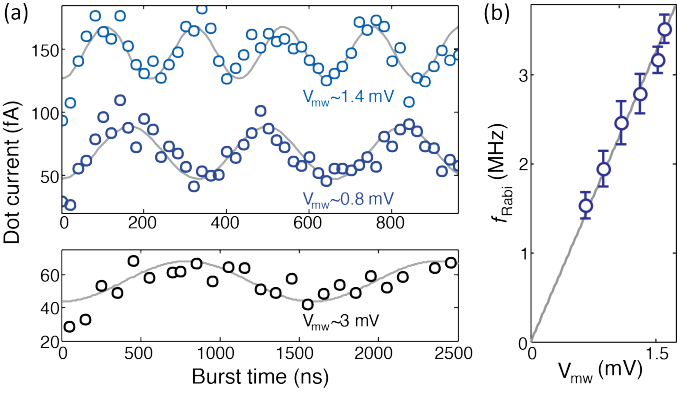 Coherent controlling is essential to use a single spin for spin-based quantum information processing. We demonstrated that a single electron spin in a QD can be coherently controlled through spin resonance driven by microwave electric fields. This is surprising at first, because a spin couples pre-dominantly to magnetic fields. However the Rashba and Dresselhaus spin-orbit coupling present in the GaAs host materials mediates a coupling between the the spin and electric fields.